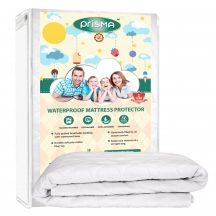 Prisma Quilted Waterproof Mattress Pads are strong and durable. This waterproof mattress pad is designed for even the toughest of bedwetting stains and soils. Set up is easy. Simply place the washable More..

Works great June 24, 2016
5 out of 5
This waterproof overlay is soft enough that my son lay directly on it. This overlay even is extremely wet still does not leak through to the sheet. This pad works so well I ordered another one.

Works Well June 11, 2016
5 out of 5
They are great! They are big enough to cover the area needed for protection.

Absorbent, water proof! June 05, 2016
5 out of 5
Perfect for elderly mother....so much easier than changing bed from mattress pad to top sheet when occasional accidents happen. Washes up and dries quickly.

No more frustration June 01, 2016
5 out of 5
I use this as cover for my mother who is incontinent. Wash in warm water and tumble dry. Works perfect.

Awesome May 05, 2016
5 out of 5
They are awesome. My son has bedwetting issue these bed pads protects his mattress and make clean up so much easier.

Get this bedding April 25, 2016
5 out of 5
From a father of 4 who has 4 bedwetting children, all I can say is - get this bedding and get it now. Its just simple commonsense. It kept the bed dry every night till the treatment ended.

Makes middle of night changes easier! February 14, 2016
5 out of 5
I bought two of these for my son with hopes that he stops using a nighttime pull-up and not having to wet the whole bed with a bed wetting accident. This bedding is definitely leakproof. The only con is that even though it says it has an anti-slip backing....that is not the case. I have tried it with jersey sheets, and flannel sheets...but it does move sometimes and get bunched up. So, I do end up having to strip the bed every now and then because the pad moved during the night. If I had it to do over again, I would definitely buy the pad with the tuck-under flaps.
<< 1 2 3 4
TOP
X Close